This blog only applicable for Collaborative Forecast, as per latest announcement, Customizable Forecast is scheduled for retirement as of Summer ’20.

By default, Salesforce will forecast using Amount field from Opportunity for Revenue forecast. However, to fit your business needs, you can add additional forecast type using custom fields in Opportunity, and the fields must be a currency field.

1. Opportunity Split
In this blog, I will add a custom currency field from Opportunity called Extra Income. I'll select the field 'Extra Income' and type in 'Extra' as Split Label. 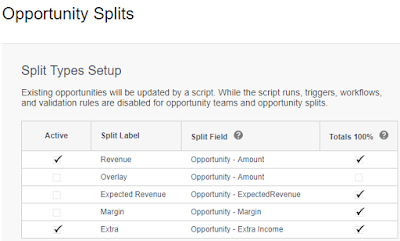 Tips: on the Split Type, the Totals 100% must be ticked, otherwise, forecast with the custom fields will not work. 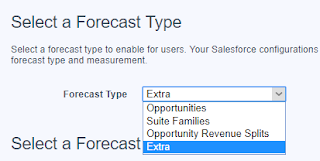 Then, you select a Forecast Measurement (Revenue or Quantity) and select fields to show in the Opportunity List.
You need to click Save button to save, otherwise, it will not save, even you have click OK button in many screens.


Forecasts tab
Now, let us see if this will work.

This is the default forecast based on Amount, it called Opportunity Revenue.

Now, let us flip to the new Extra forecast we just create, click the gear icon on the top right. 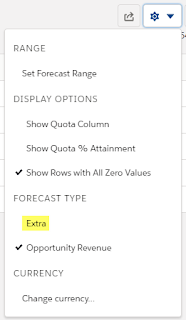 Now, let us forecast with our new forecast type "Extra"

Email ThisBlogThis!Share to TwitterShare to FacebookShare to Pinterest
Labels: Forecast

Create and sort report is simple, but sometimes you will wonder why the report does not produce in the way it should be, example report below: We sort the report by Brand -- which is a picklist field, but the order is not working properly, I expect it should sort by alphabetically, the same order result we will see in Classic.

Try to convert the report to a summary or matrix report: 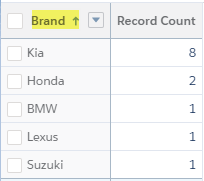 
What is the cause?
The order of groupings containing Picklist field values is based on how the values are arranged in the picklist field itself, not the arrangement selected in the Sort Order.

However, if you don't have admin access, or for some reason, you are not allowed to change the order, you can add bucket field in the report, make sure to create the buckets in the order that you want the picklist values to be displayed on the report. 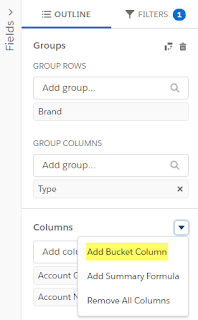 So, instead of using the original field, use this bucket field in the report.

Here an idea to vote to sort picklist values alphabetically, currently only have 470 points after 9 years.

Email ThisBlogThis!Share to TwitterShare to FacebookShare to Pinterest
Labels: Report

Nowadays, emoji is widely used from mobile device messaging, email, until more serious business applications such as Salesforce. If you don't have emoji keyboard, you can copy varieties of emoji from the internet, one of the most famous is emojipedia.org

As per this article 5 Ways You Can Use Emoji, you can use emoji in Salesforce, from:
- Chatter Post
- Validation Rules
- Help text
- Formula field
- Picklist values
- Field value
- List view

Emoji in Salesforce works in both Lightning and Chatter.

Einstein Analytics supports security predicates, a robust row-level security feature that enables you to model many different types of access controls on datasets. Einstein Analytics also supports sharing inheritance, to synchronize with sharing that’s configured in Salesforce, subject to certain limitations. If you use sharing inheritance, you must also set a security predicate to take over in situations when sharing settings can’t be honored.

If you check the above basic syntax again, then change the syntax to "$User.Id" == 'UserId', this syntax become invalid and will be rejected by the system. Even the values are the same, but the security predicate must always start with the dataset column, and not the other way round.

Consider the following requirements for the predicate expression:

How to create exceptions?
This means, a group of Salesforce users should not be impacted by security predicate. One of the simple ideas is to add unique values, such as User Role Id, or User Profile Id, or a custom field from User object to the dataset security predicate, and to the data itself.

Scenario: all users with Profile = Executive are allowed to see all data, otherwise, only see data the same with user Territory. In this scenario, Territory is a custom field in the user object and also available in the Dataset.
1. Get the Profile Id of Executive Profile
2. Add Profile Id from (1) as a column to all rows in CSV file before loading to Einstein Analytics
3. Load the CSV file to Einstein Analytics
4. Edit the dataset created and create security predicate as follow

The first part (in purple) is to allow users to see only data where Territory in the dataset is the same as Territory of user-defined in the user object.
The second part (in green) allows all users with Executive Profile allow to see all data, that's why we use or logic (||).


Using the same method, you can add Role as an exception too, just add another column and fill the Role Id to all rows. However, if you need to define more than 1 profile or 1 role, you need to keep duplicate the columns in the CSV file add use || as the exception, e.g. 'Territory' == "$User.Territory__c" || 'Executive_ProfileId' == "$User.ProfileId" || 'Strategy_ProfileId' == "$User.ProfileId", I know this is not a pretty solution, but it works. 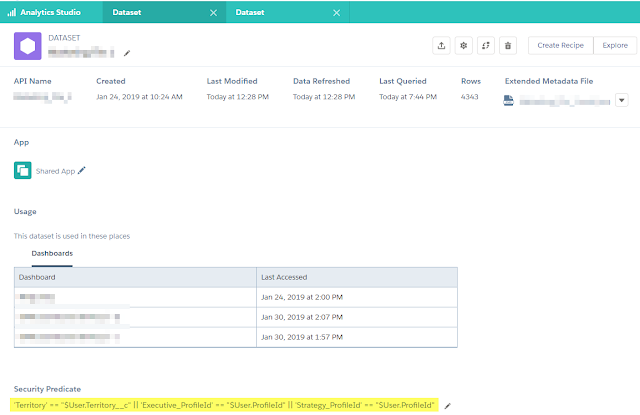 You can define dataset security predicate by edit the dataset and enter a valid Security Predicate.

Note:
1. If you replace data for an existing dataset, the security dataset defined will be stayed, including when you restore from the previous dataset. This also includes if you change the Security Predicate value in the dataflow register node, the security predicate in the dataset regenerate will stay, so you need to manually update it in the dataset.