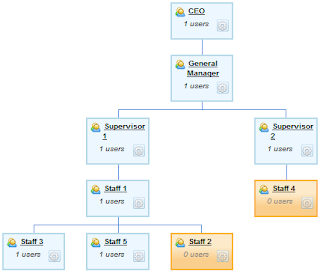 Manager can be someone from other role hierarchy. The most important, out of the box - there is NO direct relationship between Manager with Role Hierarchy, so do not expect when you change role hierarchy of a user, the Manager will be auto changed.

Role Hierarchy
Salesforce offers user role hierarchy that can be use for sharing settings. This is to determine the levels of access that users have in Salesforce. This define user permission to access a record, usually user in higher role hierarchy have the ability to read, update and change record owner of records owned by users below the role hierarchy.

Role hierarchy also determine report generated when user run report configured for My team. Dynamic Dashboard would be the other usage of role hierarchy, user only able to user in below role hierarchy as running user.

Manager
This field is especially useful for approval processes workflow.


There are 2 validation rules defined by Salesforce when you set a user Manager:

1. Cannot report to itself (the same user)
Error message: A user can't be his or her own manager

Side Note: the same logic applied when you set parent and child Accounts.

Email ThisBlogThis!Share to TwitterShare to FacebookShare to Pinterest
Labels: Report